How I found my exercise machine to violate laws of physics

I was curious how effort exerted during the exercise impacts heart rate and whether that correlates strongly with subjective fatigue and exhaustion.

It seemed that easiest way to experiment would be stationary bike. Running only has single variable, speed. One could of course change incline, but that would be harder to predict.

For elliptical machine or rowing machine it would be even more complicated!

With stationary bike, there are two variables that potentially impact power you need to exert:

The indoor exercise bike displays the pace (i.e. revolutions per minute), so all you have to do is maintain it. In addition it's displaying current resistance level (you can set it by adjusting a mechanical knob) and reports power in watts.

During exercise, I'm using a chest HR tracker, so simplest thing to do would be take whatever power the machine reports and try to find correlation with moving total/average of HR.

However, being paranoid and lacking any documentation for the machine, I decided no to trust its numbers blindly and check them instead. Technogym's website doesn't help in clarifying how power is computed. They have some sensible information like:

The power meter must be accurate.

The power measurement must be precise and repeatable. A 3-5 watt error is not significant, but if a system is not reliable there may be deviations of many tens of watts, i.e. equal to or greater than the amount of power that is gained from one year's training.

Let's see how accurate is their power meter!

It's reasonable to assume that power depends linearly both on RPM and resistance, so we conjecture watts = rpm x resistance. Let's see if it holds against what the exercise bike reports: 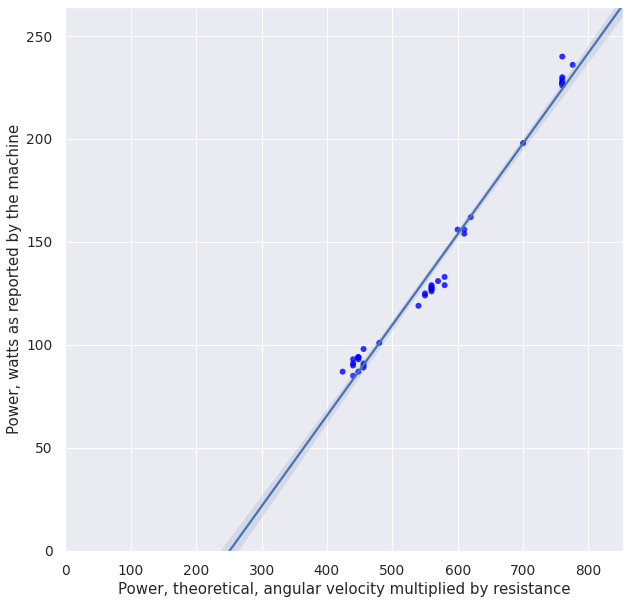 Wow, that doesn't look so well, I'd expect the regression line to intersect (0, 0). Let's double check this:

Free parameter is about -100 watts, which is quite a lot considering my high intensity intervals are 250 watts (so it means about 40% error!). I don't think it can be explained by friction either: if anything, friction would shift the plot up and make the free coefficient positive.

At this point, I'm not sure what it means. I guess I'll try to make more measurements at really low resistances and speeds to make the model more complete, but I would be too surprised if either watts or resistance reported by the machine are just made up.

I collected more data corresponding to different resistances/velocities. It's actually quite hard to consistently spin under low resistance setting, so I think I might need one more round of data collection to complete the picture! 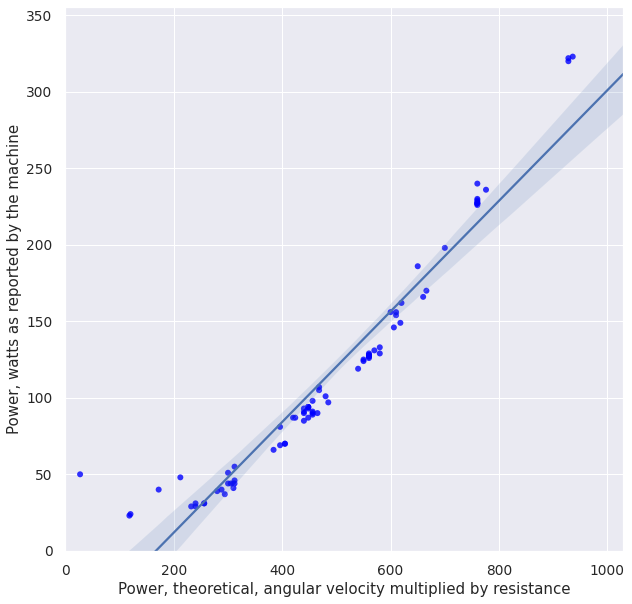 Ok, it clearly started diverging from the nice linear dependency, especially at lower values of theoretical power. It's time to try to break it down and see what is to blame: e.g., resistance or speed component, or perhaps some individual measurements. 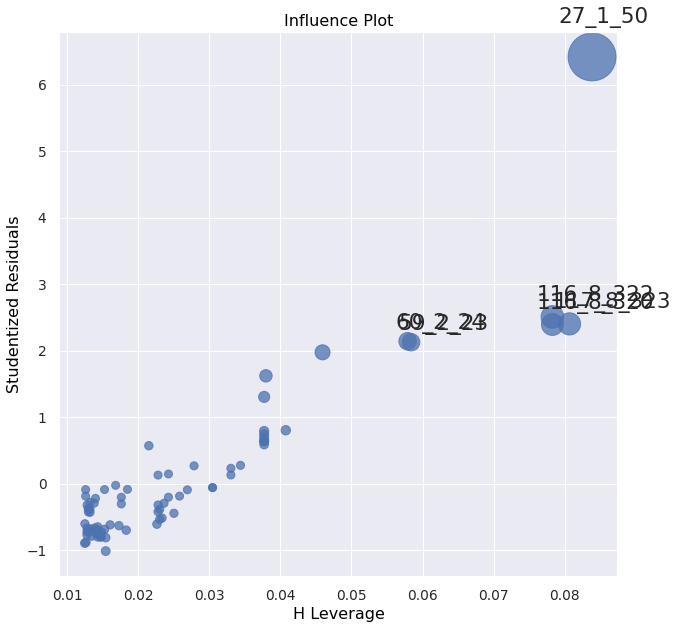 TODO hmm, 0.10 is not that high leverage right? Although depends on residual too, and here the residual is very high, so it would have high influence.. https://www.statsmodels.org/dev/examples/notebooks/generated/regression_plots.html

Ok, that's somewhat better at least in terms of outliers. Let's see if that helps: 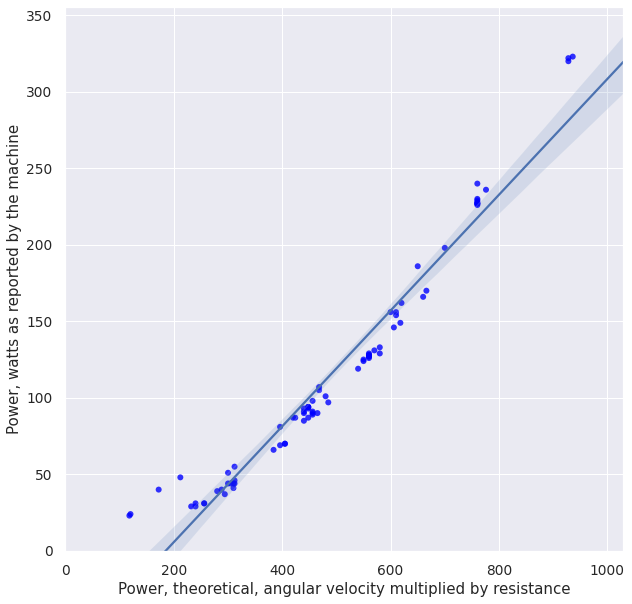 So, on one hand that did make fit look more linear. On the other hand we've had to filter out all the low-resistance observations to achieve that.

I guess I'll collect more observations to be absolutely sure.

TODO add TOC or something? 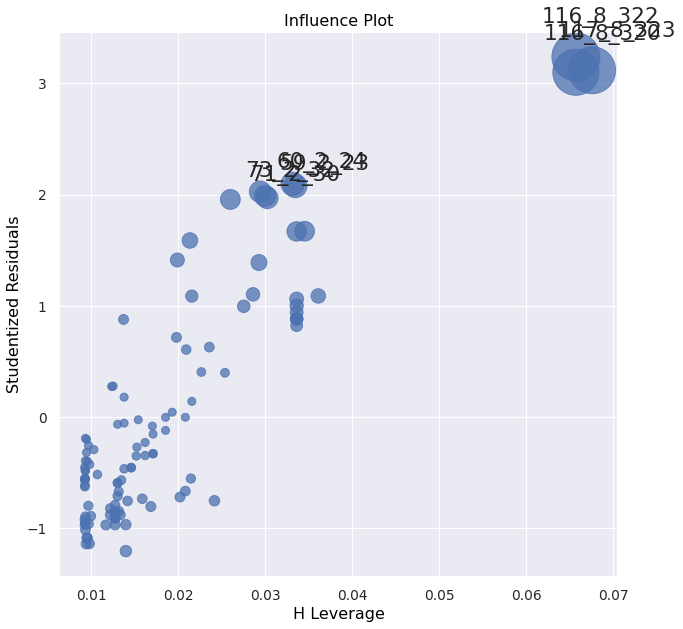 Residuals of 3 are borderline, but don't immediately mean outliers.

Let's plot and analyze! Just out of curiosity, in addition we'll color values corresponding to different resistances (the darker, the more resistance): 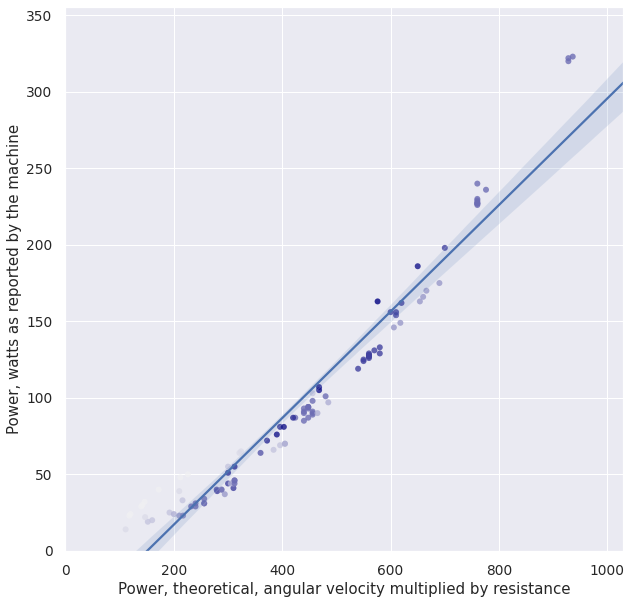 So, there is a clear trend of points clumping towards 0, which means that the model ceases to be linear.

If we try to fit the line to the points in a more reasonable exercise range (e.g. at least 50 RPM and resistance of 6, which would mean Power >= 300), that would skew the regression line even more to the right and move the coefficient even further away from zero.

So overall it means that either:

I guess be careful about trusting the equipment and do your own experiments.

As you can see, my initial project of finding some correlation with my HR turned out in a completely different direction.

Would be interesting to at least compare watts (theoretical and reported by the machine) versus calories estimated by Endomondo (which takes heart rate into account).